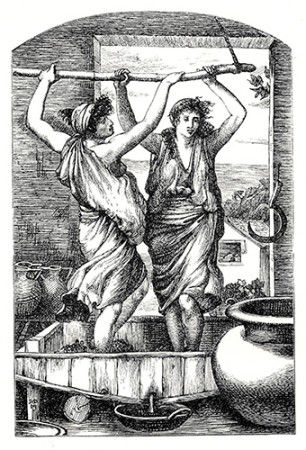 Wine was one of the first things that man created, and it has held a special place in many cultures. The history of wine is also an incredible story of technical innovation, as man applied his intelligence to the problems posed by the first chemical reactions that he encountered: fermentation and oxidation. No one can know who made the first wine. The great classical civilizations of Greece and Rome traced it back into their prehistory, and built legends around its discovery. Ancient Egypt has left us wine lists and wall paintings. Indeed, the Egyptians recorded the vintage, vineyard and winemaker on individual jars of wine: the first wine labels.

During the Roman Empire, wine cultivation extended to such a degree that there was a surplus. Due to this, in AD 92, an emperor passed a decree stating that all vineyards outside of Italy be uprooted. This led to considerable losses and later, when replanting was allowed, vineyards were established in many European countries including France, Germany and England. The Middle Ages however, saw little progress in the field of wine cultivation.

It was only after 1200 AD that many of the French monasteries managed wine cultivation. The French nobility also owned and cultivated many vineyards. Later, as a result of the French revolution, the Church was not given any power in cultivating and maintaining the vineyards. In the 1800’s, the French wine industry suffered yet again as the French vineyards were attacked by many diseases, principally phylloxera, which is a small insect that destroys the roots of the vines. This was a major setback to the wine production of France and continued to be so until about 1880, when replanting vines along with the grafting of European vines with American rootstock proved to be a good solution to the problem.

French wine also suffered economically due to the two World Wars which led to a drastic reduction in the quality of French wine. As a result of this, the Appellation d’Origine Controlee (meaning “regulated origin name”) or the A.O.C was devised. The A.O.C outlined the standards and laws regarding modern wine production and aided in defining the grape growing regions as well as protecting the quality of wine production. The A.O.C was instrumental in redeeming France’s reputation for wine production and also in determining the standards for quality and

Making wine is the blend of the farmer, horticulturist, and chemist’s skills. But above all it’s an art. The art to develop a unique product made with the heart and soul of a man: the winemaker. The man who will turns grapes into wine! The magical moment is there.

In Europe, the most visible words on a wine label refer to the place where the grapes were grown. In the New World, it is the opposite, the label is the name of the winemaker or the winery. This difference reveals two ways to see the wine industry. The European tradition and belief is that wine is made in the vineyard, by contrast, for the New World producers the wine is made in the winery.

The unique flavor of each wine is created by a combination of three principal factors, the climate, the soil and the landscape.It’s what we call “Terroir” in France; it will form the character of a vineyard and its wines. Temperature, distribution of rainfall, hours of sunlight, altitude, soil, wind, and many more factors make up a unique terroir.

Above all this is the combination of the terroir and the variety of the grape that will make the character and the flavor of a wine. The most important red grapes are the cabernet franc and cabernet sauvignon – Bordeaux wines -, the pinot noir – Burgundy and Loire valley. The most famous white wine grapes are chardonnay and sauvignon blanc. There are between 7,000 to 10,000 different types of grapes in the world… 500 are used for wine productions.