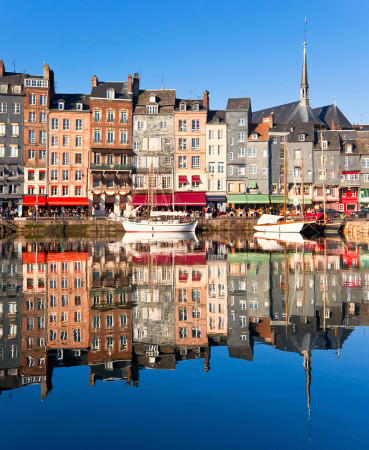 Normandy or Normandie, region and former province, NW France, bordering on the English Channel. It now includes five departments—Manche, Calvados, Eure, Seine-Maritime, and Orne. Normandy is a region of flat farmland, forests, and gentle hills. The economy is based on cattle raising, fishing, and tourism. In Rouen (the historic capital), Le Havre (see Havre, Le), and Cherbourg there are also shipbuilding, metalworking, oil-refining, and textile industries. Normandy has outstanding beach resorts, notably Deauville, Granville, and Étretat. It is known too for its many old fairs and festivals. Mont-Saint-Michel lies off the coast where Normandy and Brittany meet. Part of ancient Gaul, the region was conquered by Julius Caesar and became part of the province of Lugdunensis. The Norsemen (or Normans), for whom the region was named, soon accepted Christianity. In 1066, Duke William (William the Conqueror), son of Robert I, invaded England, where he became king as William I. The succession in Normandy, disputed among William’s sons (Robert II of Normandy and William II and Henry I of England), passed to England after the battle of Tinchebrai (1106), in which Henry defeated Robert. In 1144, Geoffrey IV of Anjou conquered Normandy; his son, Henry Plantagenet (later Henry II of England), was invested (1151) with the duchy by King Stephen of England. It was by this series of events that branches of the Angevin dynasty came to rule England, as well as vast territories in France, Sicily, and S Italy, where the Normans had begun to establish colonies in the 11th cent. Normandy was joined to France in 1204 after the invasion and conquest by Philip II. Normandy was again devastated during the Hundred Years War (1337–1453). The Treaty of Brétigny (1360) confirmed Normandy as a French possession, but Henry V of England invaded the region and conquered it once more. With the exception of the larger Channel Islands, Normandy was permanently restored to France in 1450, and in 1499, Louis XII established a provincial parlement for Normandy at Rouen. The Protestants made great headway in Normandy in the 16th cent., and there were bitter battles between Catholics and Huguenots. Louis XIV sought to complete the assimilation of Normandy into France, and in 1654 the provincial estates were suppressed. The revocation of the Edict of Nantes (1685) led to a mass migration of Huguenots from Normandy and a grave economic setback for the region. In the 18th cent., however, prosperity returned. In 1790 the province, with others in France, was abolished and replaced by the present-day departments. The region was the scene of the Allied invasion (1944) of Europe in World War II 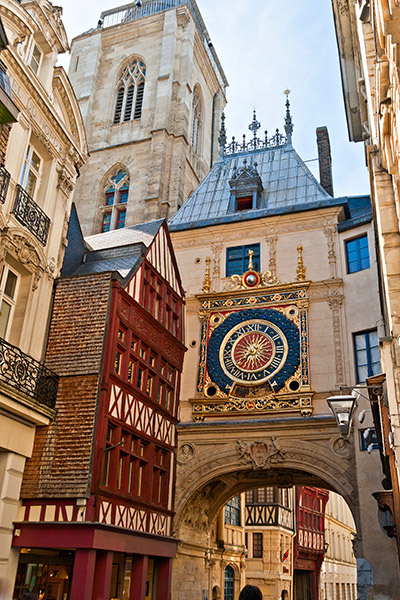 One of the most distinctive features of a people, and therefore of its culture, is its language, and for centuries the Norman dialect, and the written language (Normanno-picard for linguists), have reflected the complex history of the region and the origins of its people. Many local words still in use, such as “berca” (sheep, derived from latin), “angobilles” (pork tidbits, from Celtic) and “floquet” (a little herd, from Scandinavian) illustrate this linguistic diversity. Pronunciation within the region varies from north to south, with latin and germanic influences dominating in the north, and French in the south.

Architecture, both official and individual, is a very visible expression of local culture. When you think of typical Norman houses you probably picture half-timbered cottages or farms, with thatched roofs and irises growing along the rooftop. In many ways you will be right, for until the industrial revolution people built their homes from the materials available nearby, and in much of Normandy the local materials were wood, straw and thatch. Dressed stone was expensive, and in short supply, but rocks and pebbles cleared from fields were never lacking. So in areas such as the Auge country, the Marais Vernier wetlands, in the Eure region and in the west, timber-framed buldings abound, with local differences in structure and half-timbering, constructed on base courses of undressed local stone or bricks. In the north, and to the east closer to Paris, where stone and good bricks were more readily available, traditional building styles make more use of those materials, and less of wood, with tiled roofs instead of thatch.

Before the twentieth century brought improved communications and the spread of virtually the same style of clothing across Europe, it was possible to tell where a person came from by his clothes, and in common with other essentially rural economies, Normandy has a long tradition of weaving, lace-making and embroidery. Until the 19th century, men and women wore locally-produced costumes, often home-made from the raw material, linen, hemp or wool, to the finished garment, which naturally varied in style and conception from one region, and sometimes from one village, to another. Weaving, sewing and embroidery were the domain of every matron or lady and their daughters, and the Bayeux Tapestry bears witness to the embroidery skills of the women of the 11th century nobility. Costumes evolved over the centuries, as tastes and materials changed, and the Museum of Normandy in Caen has a fascinating display of costumes from all parts of the region. Industrialisation, and the arrival of quantities of cotton imports from the 18th century, gave rise to the mechanisation of crafts like lace-making and the development of new activities such as the production of ribbons and printed cotton cloth in the towns, but in the west traditional cottage industries survived until the early 20th century, as did the everyday wearing of the typical bonnets, “coiffes” and skirts. Traditional costumes can still be seen today at festivals and ceremonies. 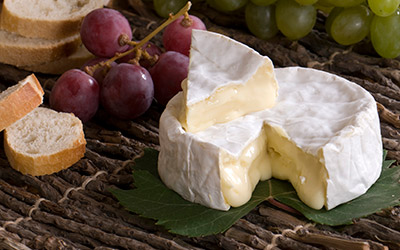 A cheese from Normandy, Camembert is perhaps the most famous French cheese, and is known and imitated worldwide. A ripe Camembert should be just soft on the inside, but not too runny. A young Camembert will tend to be hard and dry, and rather tasteless; an overripe Camembert, going yellowish on the outside, will tend to smell quite strongly and is not to be reccommended other than to those who enjoy strong cheeses. The crust of a Camembert is usually eaten.
Supermarkets are full of Camembert lookalikes, since any similar cheese that is not manufactured in the appellation contrôlée area in Normandy cannot call itself Camembert. These lookalikes tend to be sold young. To test a Camembert or a lookalike, open the box (not the protective wrapping paper!) and press gently. The cheese should be just soft, but not spongy.

A creamy soft cheese, uncooked and unpressed, from the coastal region of Normandy, south of Deauville; this is one of the oldest cheeses in France, and has been documented since the 12th century

Although calvados can be dated back to Napoleonic times when it was used both as an anaesthetic and antiseptic in Napoleon’s navy, most calvados is relatively modern. However, you can still buy rare calvados which dates from the first half of the twentieth century. Calvados is made from a cidre which is produced from the apple orchards in Normandy. Apples are not generally acidic enough to start the distillation and so most firms also combine a small quantity of an acidic pear known as a Perry Pear. It is for this reason that most young calvados carry a distinctive pear drop aroma but this will start to mellow after 10 or 12 years and provide a richer apple flavour. Calvados distilled before 1960 are considered as very rare and can therefore attract quite high prices. 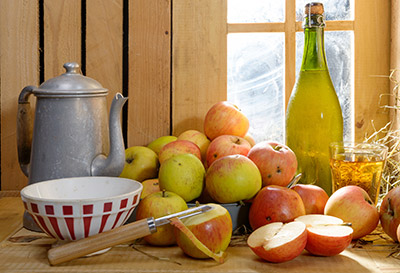 Cidre (French sparkling, fermented apple cider) is a wonderful drink that is not at all like its British (and most American) counterparts. Normandy Cidre is naturally fermented using yeasts that exist in nature on the peels of the apples. In a process very similar to that used for Champagne, the apple juice is fermented twice — once in large wooden casks and once again in the bottle It is the second fermentation that makes it bubbly. What distinguishes Normandy Cidre is its characteristic bright, apple flavor. British cider tends to taste almost like beer or like beer with a slight apple flavor. Normandy cidre tastes like fresh sparkling apple juice right from the tree. The alcohol level tends to be low — 3% to 5% depending on whether you prefer sweet (doux) or dry (brut).